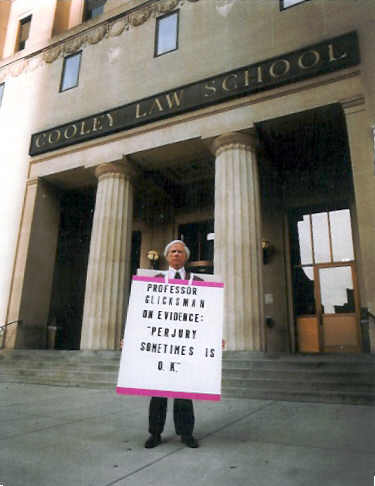 This is the first time in our nations’ history that a non-lawyer (Steve Dean), representing himself as the Plaintiff, has litigated a freedom of speech  picketing case before a US Court of Appeals Court against a defendant who was employed as an executive for a state bar, won the case and the court then believing the case was so important that they published it in a federal law textbook so that the legal community would be notified of it’s importance. The case has also been cited in over 37 other federal court cases and 2 United States Supreme Court cases.

Stephen ‘Steve’ Dean is not now nor has he ever been licensed to practice law even though he graduated from Thomas Cooley Law School 20 years ago in the year 2000 at age 60 and then personally litigated as Plaintiff before the United States Court of Appeals 6th Circuit and won an important freedom of speech picketing case against the past Regulation Counsel for the State Bar of Michigan. The case is taught in some of the more prestigious law schools today, Dean v. Byerley, 354 F.3d 540 (6th Cir 2004).

It is unheard of for any US Court of Appeals to allow a non-lawyer to appear before them and litigate a case. It is beyond belief, but true, that Steve won the case.

He is the first non-lawyer in our nations history to win this type of case. He gives all the credit to his Lord and Savior Jesus Christ.

END_OF_DOCUMENT_TOKEN_TO_BE_REPLACED

US 5th Circuit Court of Appeals Chief Judge Edith Jones said “The American legal system has been corrupted beyond recognition.”

END_OF_DOCUMENT_TOKEN_TO_BE_REPLACED

Posted in Uncategorized | Comments Off on US 5th Circuit Court of Appeals Chief Judge Edith Jones said “The American legal system has been corrupted beyond recognition.” 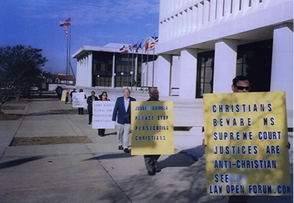 Steve Dean led other fed-up Christians for five days picketing the corrupt state supreme court judges for sicking the police on him without any reason whatsoever. (photo above).

Should a delegation of pastors have the right to peacefully deliver 11,100 petitions on behalf of  Steve Dean, signed by voting age Mississippians, to the Mississippi Supreme Court without the Justices calling the police on Dean?

Should a delegation of Jackson, Mississippi pastors be able to peacefully deliver 11,100 petitions to Chief Justice James W. Smith, Jr., Justices James E. Graves, Jr. Kay B. Cobb, George Carlson, Jr. and the other Justices on the Mississippi Supreme Court informing them that they are outraged with the way a Mississippi Board Chaired by James R. Mozingo has discriminated against Christian activist E. Stephen Dean for over three years by refusing to give him a final answer to his request to take the bar exam so that after becoming licensed to practice law he can represent Christians on Christian issues free? Did those Justices act in a Christian manner when they responded to the delivery of the petitions by calling the police on Dean?

END_OF_DOCUMENT_TOKEN_TO_BE_REPLACED

Read below about Steve Dean, who graduated from law school at age 60, personally appeared, even though the US Court of Appeals, 6th Circuit knew that he was not licensed to practice law and won the published case, Dean v. Byerley 354 Fd 3rd 540, 6th Cir. 2004 against the Regulation Counsel for the Michigan State Bar. This case is now taught today in some prestigious law schools.

FED UP WITH ANTI CHRISTIAN JUDICIAL DISCRIMINATION YET BELIEVING IN THE JUSTICE OF THEIR CAUSE MISSISSIPPI CHRISTIANS ORGANIZED AND LED BY STEVE DEAN ARE DETERMINED TO CONTINUE PICKETING CORRUPT MISSISSIPPI FEDERAL JUDGES Wingate and Guirola UNTIL JUSTICE PREVAILS.

THERE ARE NO PHOTOS OF STEVE BECAUSE HE WAS TAKING THE PHOTOS. 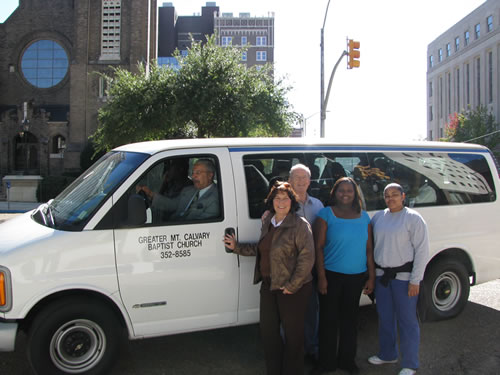 Photo of driver Reverend Cameron and first load of picketers being delivered to the Jackson Federal Courthouse for 3 days of protesting against years of anti Christian conduct by Mississippi Federal Judges Wingate and Guirola. 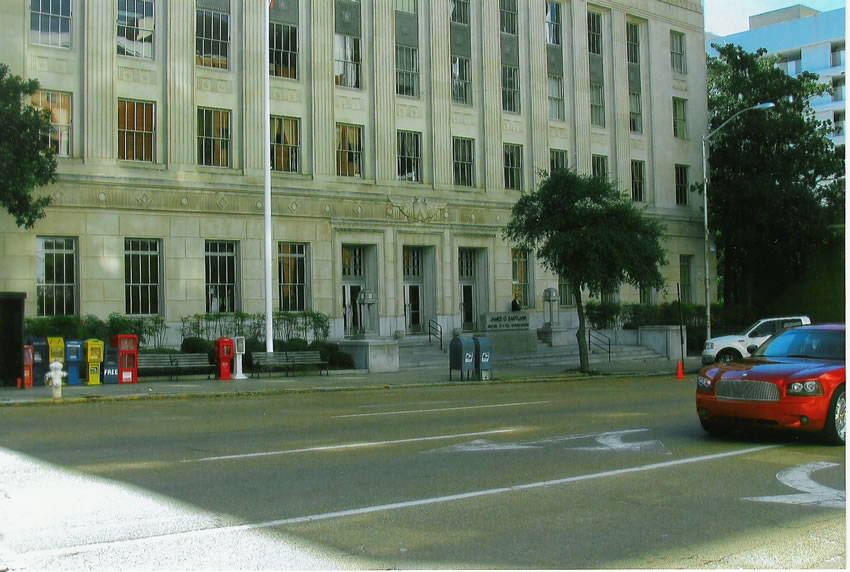 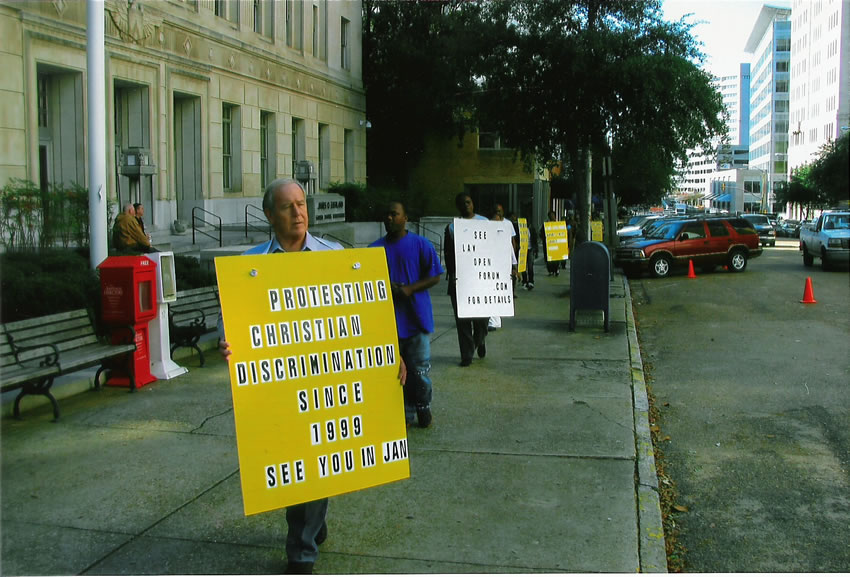 How the Jackson Courthouse looked during the 3 days late last year when Jackson Christians, led by Steve Dean, protested against Federal Judges Wingate and Guirola’s unlawful anti Christian discrimination by personally picketing the judges at their offices, rather than their residences. 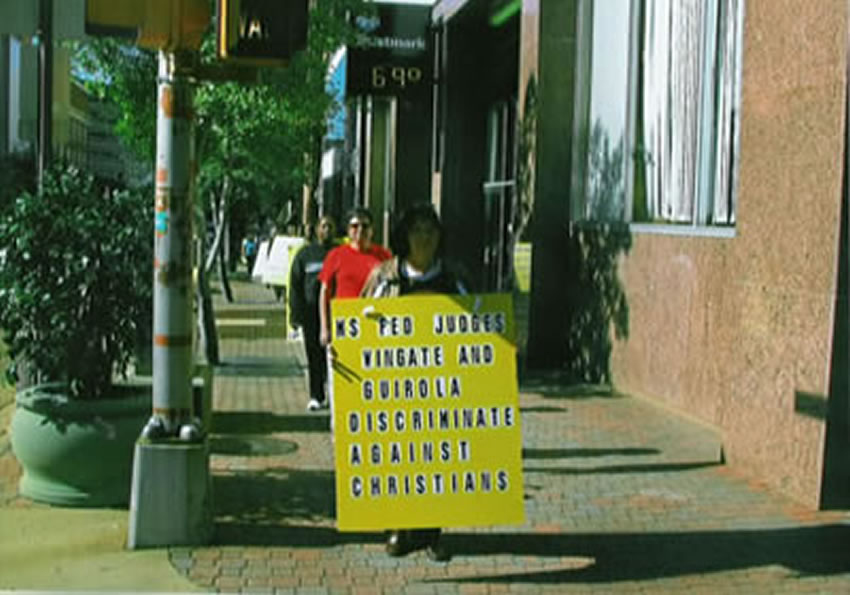 Photo below is of Christians, led by Steve Dean, during week long Jackson protest in 2007 against anti Christian conduct by Mississippi Judges.

Friends of Steve Dean picket federal judges for 3 days on behalf of Steve Dean who has been trying for 7 years to become a licensed lawyer so he can represent Christians on Christian issues absolutely free.